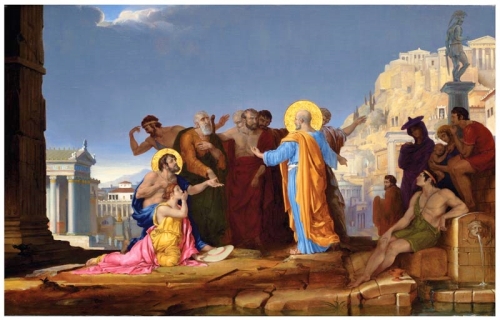 Leonard Porter, Saint Paul Preaching to the Athenians on the Areopagus | 2009, Oil on Linen, The Liturgical Institute, Mundelein, Illinois

“‘And you shall know the truth’, which now is hid from you, and speaks to you. ‘And the truth shall free you.’”

St. Augustine, Commentary on the Gospel of St. John, Tractus 41.1

To the modern mind, Truth and freedom seem at odds with one another. We join Pilate in asking ‘What is Truth?’, and hearing the currents of modern derision, we walk off fearing for our lives. We wander about the halls of modern influence in a daze of confusion, attempting to salvage a final grasp on power. We have many questions and few compelling answers. Riddled in subjective perplexities and preferences, we have sway with the waves of opinion, and cower when they become waves of fear.

Interiorly, we are downcast and divided; frail and gripped by desires that exhaust – we remain enslaved. Having severed the connection between freedom and Truth, we have lost a sense of the reality of the human condition, of the darkness of sin, and the power of grace; we have lost a sense of our needfulness, and have attempted a course of self-redemption that has led us far from happiness.

Could we return to the original unity between freedom and Truth? Could we defend the bond between them and so find our way once more?

In a cultural context where faith is a nemesis of progress and personal liberty, we need to rise up in the court of public opinion to defend a higher freedom. This is a freedom that transcends materialist categories of social emancipation from the endless sufferings and injustices of this earthly life, and begins again to witness to that authentic emancipation which inevitably places us at the heart of the redemptive mystery of the Incarnation

Have among yourselves the same attitude that is also yours in Christ Jesus,

Who, though he was in the form of God,

did not regard equality with God something to be grasped.

Rather, he emptied himself,

taking the form of a slave,

and found human in appearance,

becoming obedient to death, even death on a cross.

To the modern mind it is baffling that we should lose all, should empty ourselves, to gain salvation. Such an idea stands in the way of our perceptions of progress an success. Believing this paradox requires the profound realization that God, having no need in Himself, made a choice: He chose to send his Son to redeem fallen humanity because of His mercy and His love for us. The Son takes the form of a slave, and through it He reveals Himself the Savior. Being both slave and master, He shows the great Christian paradox of authentic freedom – a freedom grounded in the primordial truth of His endless love, and the full generosity of his redemptive sacrifice.  Placed at the heart of this mystery by His design and desire for our salvation, we are slaves insofar as we belong to the world, but masters, insofar as we live now the way of grace that leads to beatitude.

An honest examination of our modern conscience leads us to understand what it is that truly enslaves: pride envy, lust, greed, discontent, are not just individual struggles, they form the fabric of social bondage as they assault the very order of the common good. It does not take a profound analysis to see the evidence of these forces at work in the world around us, and in our own hearts. They are the division of sin made manifest, the revelation of the frail woundedness of the human condition, and its present subjugation.

At the heart of this tragic scenario, the dualistic reduction of the human person that plagues modern culture cuts another dividing line. There is a general destruction of human identity, a rebellion of the self away from what we are — a unity of body and soul, made in the image of God, who is Unity itself— and fragmented into social categorizations that sever mind, from body, from soul, from society. We see a veritable de-struction — a breaking of structure and unity of being. Nothing can be more enslaving than the separation of the self into disparate weaker parts, then subjected to the power of evil.

Of all this disunity emerges the modern slave—one who is not a member of the household, but lives apart, deprived, and impoverished. To live apart from Truth – to live this interior and exterior division – then, is modern bondage.

So where is freedom?

What is lacking most of all is not a series of options — for we have endless alternatives of power and pleasure to choose from, but the fundamental courage to choose an objective allegiance to that Truth that is prior to subjective persuasion and desire. At present, we have no idea where we belong and where we are going. There is no telos for our lives, no direction, no end goal. As sin weakens our will, it alienates us from each other and from the good, and debilitates our capacity to know what is right and to choose it. We live imprisoned in the dungeons of modern distraction, apart from God, and so apart from grace, apart from hope, apart from that capacity for self-mastery that we call the virtuous life. Enslaved to our lower passions and desires, we thread the dark path of confusion and discontent amidst the glamour of the modern world.

And still we are not happy.

It is this irrepressible desire for happiness that may save us in the end.  Having tried all things and still thirsting for more, it beckons us towards a prodigal return, in the expectation of mercy

For freedom Christ has set us free; stand fast therefore, and do not submit again to a yoke of slavery.

This is the realization of Paul who first persecuted the Church, and then became a prisoner for Christ, undaunted by persecution, hunger, sorrow, death. In this promise of freedom is the further meaning of that invitation to mirror the redemptive love of God, through a full offering of ourselves in charity — for we see what the end is. From it, comes the evangelical courage to bear witness to the Truth without counting the cost. Through it, we arrive at friendship with God

No longer do I call you servants, for the servant does not know what his master is doing; but I have called you friends, for all that I have heard from my Father I have made known to you.

For freedom He has set us free: freedom to know Him who is Truth Incarnate, to partake fully of His joy.

And so we learn that Truth cannot be known, cannot be loved, cannot be lived without the fullest use of our freedom. Nor can freedom be authentic without an undivided allegiance to the Truth in which it finds its meaning. Together, freedom and truth are the way to happiness, by which we leave slavery behind, and enter the lavish feast prepared for us.

For the creation waits with eager longing for the revealing of the sons of God; for the creation was subjected to futility, not of its own will but by the will of him who subjected it in hope; because the creation itself will be set free from its bondage to decay and obtain the glorious liberty of the children of God.

In the presence of the new Israel we come forth like Lazarus out of the grave of self-indulgent pride, as witnesses to One who conquers even death.

We have been called by name, by the Truth ‘which is hid from us, and speaks to us’, to come forth, and live as children of God: redeemed, called to be free at last.