Father To The Orphaned (Soul) 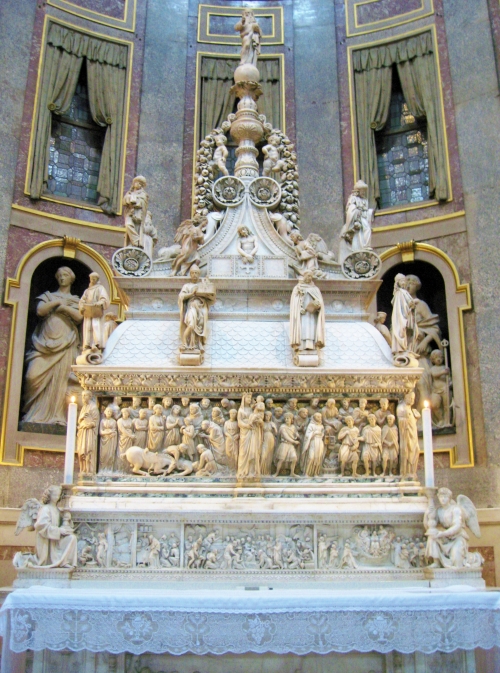 On a routine trip, I stopped in Bologna for no other reason than to eat — eat well, so well.

Six years earlier my father had died. This was one of many returns to my father’s land, without him. I wanted a good meal, a meal like the ones we always shared, the ones he loved.

Tangible reminders of his life were everywhere: favorite places, scents, colors; the sounds of Vespa’s buzzing towards home at midday, and clanging plates heard passing by the shutters of a city still living to an older tune.

Bologna is a city of food markets, and they overflowed with bounty. Fresh aubergine artichokes with stems a foot long were in crates next to peaches so fragrant, the scent intoxicated. Figs and grapes were ripened to explode — an oozing perfection attracting royal honeybees. Every imaginable edible confection one could desire was there; an overwhelming bounty.

I was starved for memories, for glimpses of a happy past. In my father’s death, childhood had vanished in an instant, and I was there to reclaim its joys. I was an orphan on the trail of seemingly evanescent love, ambulating in an edible Eden.

Without a map, I walked the streets as one would in a familiar place. Everything was a surprise. A random turn to the right, and I found myself in a non-descript piazza, a church there in front of me. I chanced on the church’s name and though none of it. Somewhat removed from the bustle surrounding the Duomo, this place looked like any of the thousands of churches in that part of Italy. An unfinished terracotta facade, a marble tympanum with the mosaic of a saint, on his face a patina from years of piercing sun and damp northern air; simplicity and beauty — all a splendid dignity in stone, usually concealing priceless treasures.

The door partly ajar, I stepped in. The cool contrast to the scorching heat was immediate. It was a place of solemn silence. At mid-afternoon, the heart of that town was asleep, and the friars must have been enjoying that same repose. Not a soul stirred. I gasped.

I had the place to myself and yet hesitated — alone, but most likely being watched by the elderly ladies who usually lurk in the shadows of these sacred places, spending their senior years fiercely protecting these houses of God.

And then it happened. As I walked up the nave, I stepped into a ray of light that pierced through the clerestory windows. I turned, trying to evade the blinding streak, and to my right was a chapel, and in front of me perhaps one the greatest masterpieces of Western art. A couple steps up, and I passed the threshold. The lyrical beauty of words startled me

[And that his name might echo what he was,
a spirit moved from here to have him called
by the possessive of the One by whom
he was possessed completely.]
Dominic became his name; I speak of him as one
whom Christ chose as the worker in His garden.

It took me a few minutes to understand that I was standing before the actual tomb of St. Dominic de Guzman. That inscription on the floor, red marble incised with that immortal quote from Dante’s Paradiso, gave hint of something special. In Italy, Dante is reserved for nobility — for heroes. That much, I knew.

Looking up it became clearer; that masterpiece in pure white marble, a marvel in stone — the impeccable carved frieze by Pisano I had studied some years before in a class on the history of Italian Gothic art — the later additions, the relics, the candles, all telling to the academic eye.

I remember suddenly thinking how my father had a deep devotion to this saint, so much so that my youngest brother bears his name. It seemed, strangely, as if I had been led there.

The surprise lasted a bit. I was, indeed, alone.

For the first time in a while, I prayed. It was all so odd, and yet felt so familiar, as if in the past I had been there before. I could not remember. I lit a candle for my father’s soul, as one would lay a flower at a grave, with devotion and that palpable love that moves to tears. Grief sprang ruthless to pierce the heart. Faint memory of this saint’s life I had been read as a child came to mind. He was Spanish, that I knew. Why, then, buried here, I thought. I remained for a while half praying, half staring; the flatlining of the hardened heart was stirred to life by beauty and silence and the flickering light of a sanctuary lamp. The peace of that place remains a vivid memory, stunning in its beauty and grace.

I never had that meal. Lunch had long passed, and the dinner preparations began as I boarded a bullet train heading south. That porticoed city, its ancient alleys, that place of culinary joy would be instead the place where I would visit the relics of a saint — a surprise that would not be mere chance, or the memory of a missed edible delight, but the beginning of the story of my conversion. It was all a feast of beatific import, and sheer gift.

Some years went by. I found myself looking back at pictures from that trip, and remembering that quiet afternoon in Bologna. I realized that on that midday visit I had come to know one who would become the father of a migrant orphaned soul. He, who long ago had wept for sinners, and for their salvation, in the plan of God must have also wept for me. And God had heard.

The rest is history, understood only in the light of hindsight from that point. That visit, it was no accident. I learned that half a decade later. My soul was starved, and it fed on glory that day. It had all been a brief and luminous encounter that I only understood when it had since changed my life.

Fathers never leave their daughters. Even in death. So I had sensed before that marble ark bearing the saintly remains of that man of God who was now also father to me. Our holy Father Dominic, they call him. I call him.

I had a faint glimpse of what I did not recognize as the union of the blessed that day — a hint, then, that the communion of saints was not some fable of ancient piety, and that the fatherhood of God lived on.

Now I know it is real.

Seven years have passed since that afternoon. That stirring of my heart was the first stirring of grace — a portal to life, a spring of hope. And still it lives, because the Father lives and sustains, and the Incarnation continues in the saints for souls that remain in the gardens of Gethsemane and yearn to hope again.

That day, as I grieved one dear and dead, at the feet of that altar I discovered the immortality of sanctity — that on earth one could love God so much, so fully, as to love His children even beyond this life. Death has a strange sweetness to it, if it looks like that — so pure, so luminous, so living. I knew that in the flame I left there I had mourned as an orphan, a daughter for a father lost too soon. And yet, my soul had secretly rejoiced. I found myself the inheritance I did not know I longed for — heir to joy in the same vineyard Dominic tended — the vineyard of the Church, the Garden of God. He banded together men and women of meager means, whose sole aim was working for the Lord, for the salvation of souls. They became preachers of grace, laborers for souls loved with the Savior’s own life. I would become daughter in this adoption of souls.

Dominicus: his name means ‘of God’. Before his grave, as before the grave of a father, I learned what being ‘of God’ means in this life. In that edible Eden, it turns out it was really my soul that was hungering and seeking solace. And he was willing to guide it with a father’s care, towards the banquet of grace.

Sanctity is immortal, and we are not orphans in the order of grace. Those saintly tears still water the gardens of God, and the blossoms are ever ancient, ever modern.

For hope is light in our darkness; timeless, enshrined in the saints, she shall spring eternal.

O light of the Church,
Teacher of Truth,
Rose of patience,
Ivory of chastity.
You freely poured forth the waters of wisdom.
Preacher of grace, unite us with the blessed.